The Growing Trend of the Athletic Jersey Fashion 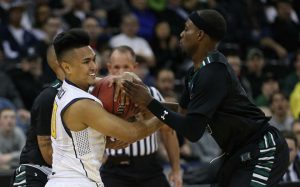 The month of March is the peak of the athletic jersey look. Countless fans will sport jerseys due to the impending March Madness, the new MLB season, and the closing months of the NBA and the NHL seasons. This time demands the increasing growth of athletic jersey fashion and it doesn’t look like it will disappear anytime soon. An example of how contagious this fashion has become is the NFL. During the season, all the teams infect their host city, nearby towns and even state with jersey fashion fever. In your household, on the street, and in especially the bar; the average person can’t open their eyes without noticing someone wearing the jersey, walking around. Let us take a deeper look into how popular the jersey look has become.

It wasn’t long ago that the sports jersey was only associated with beer belly frat guys and the hardcore sports fans, but the popularity among the public, from all ages and genders, have certainly excelled over the recent years. Athletic jerseys from soccer, football, to baseball has been updated and stylized by professional fashion designers and even held on the runways in the past few years. According to Andrew D. Lecke, a style editor from Esquire Digital, “You don’t have to be athletic to like sports—and you don’t have to be athletic to look good. To me, sports jerseys in fashion are about embracing the world. They also speak to street culture’s continued influence on style, something one ignores at his own risk.” America’s culture is now more involved with sports than ever before.

Furthermore, there is one thing for certain; America loves living in the moment. The most popular trends always start when something becomes the most-talked-about; for example, wearing LA Clippers jerseys were the craze two years ago because of their high-flying dunks and their new dominance in the league. Now, many non-fans like to sport Golden State Warriors gear because they are the current NBA Champions and have current superstars like Stephen Curry who has become immensely popular recently. Sports are all about moments.

The jersey is the quintessential symbol that connects the fans with their teams. In major football towns like Pittsburgh and Baltimore, both men and women wore their team jerseys to their professional workplaces on the Friday before a game. People are not sports fans themselves but are dating somebody who is, would partake in dressing up in football and basketball jerseys and even make them fashionable.

The NCAA Basketball Tournament will inspire fans everywhere to start sporting their college team and it will be crazy. Practically every jersey from the pros (NFL, NBA, MLB, NHL) is made out of 100% polyester. That favorite jersey of yours might be too delicate to wash, so just leave it to Pico Cleaners and we’ll help maintain that jersey look of yours.